A 60 year old man got a fresh lease of life after one of the rarest heart valve replacements (Valve in Valve) was done for the first time in Karnataka, by a team of doctors led by Dr. Yusuf Kumble at Indiana Hospital & Heart Institute, Mangalore.

Mr. Raghavan, a patient hailing from Kerala, had undergone an open heart surgery and mitral valve replacement in Kerala about 12 years ago. His artificial valve degenerated and slowly became dysfunctional during the last one year. He consulted many doctors at different hospitals for treatment of heart failure and was advised to redo open heart surgery in order to change the valve. He was suffering not only from heart failure but kidney failure too due to which redo open heart surgery would be highly risky. Hence doctors were not willing to perform the surgery on him. He had lost all hope. He was admitted to Indiana Hospital ICU and during the two weeks his heart condition worsened and was on ventilator.

He was offered a new modality of treatment of replacing the mitral valve with another artificial valve without open heart surgery. In this method a large hose-like pipe is introduced through the leg vein and enters into the right heart under fluoroscopic guidance. Then this enters the left heart after making a small hole in the inter-atrial wall of the heart. Through this wire a folded balloon mounted valve is carried to the left heart and positioned across the mitral valve. The valve is then implanted under fluoroscopic guidance.

This new treatment is done without opening the heart. Unlike angioplasty and stent which is only 3-4 mm in diameter, a heart valve is 23-28 mm in diameter. This is quite difficult to implant inside the heart without open heart surgery. This mode of treatment was introduced about five years back in the west and is slowly becoming popular. In India this the 15th valve implant and the first percutaneous valve implant in the southern states of Karnataka and Kerala. 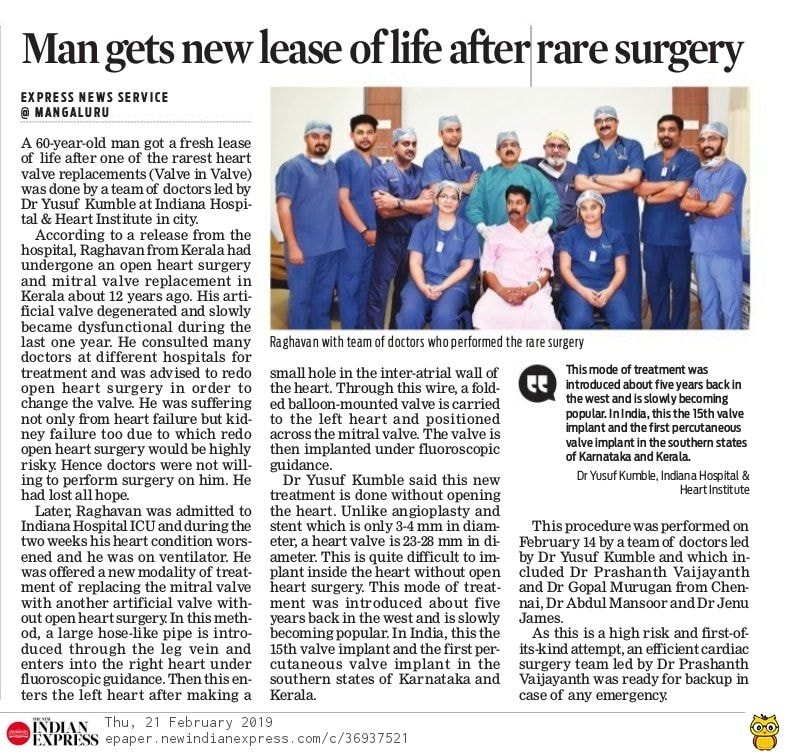